The A.H. & Veterinary department is striving very hard to maximize the breedable cattle population under organized breeding programme for the economic benefit of the farmers. Introduction of AI facility to all 1275 existing stationery government institutes were provided in a phased manner as part of the strategy for achievement of the above mentioned objectives. Presently more than 800 centers have been functioning out of the total 1275. Extension programme for farmers and capacity building of the departmental AI workers were also done through ARIASP, NPBB and RKVY. It was targeted that by the end of the NPBB about 50% of the total breedable female cattles would be covered under the organized breeding.

But lack of trained manpower under State Government network is one of the main reasons for not achieving the desired result of coverage. Apart from these facts, the number of Government AI centers are not sufficient to cover the entire population especially those farmers residing outside the serviceable area of the Government centers as Artificial Insemination (AI) programme demands 24 hours service accessibility to the AI centers. To increase the coverage, the only viable alternative is outsourcing of the AI activity in the interiormost areas beyond departmental service network. This can be achieved by selection of interested unemployed educated youths from those interior areas, train them on AI as per GoI guideline and introduce as Private A.I. worker or Gopal Mitra (GM) in order to make breeding inputs available at farmer’s doorstep.

Government of India, under National Programme for Bovine Breeding (NPBB) Phase – II, proposed to induct 20,000 private AI workers all over the country, making it a mandatory agenda for any cattle breeding programme. Moreover, these Gopal Mitras also help in providing self employment. In Assam, ALDA started implementation of this component of training & establishment of GM under NPBB to fulfill the urgent need of manpower to cover the interior areas of the state and also provide alternate employment generation to those youths as part of the programme. The GMs trained were put under rigorous training under field vets of their respective areas before the work started on individual basis in their areas. They are provided with the necessary equipments ( A.I. equipments & LN container)  free of cost under this component of NPBB to work in their respective places after successful completion of the training. 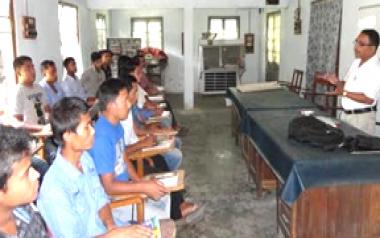