Genesis of Cattle Breeding Programme of the State

The cattle breeding programme gained momentum in 1968-69 following introduction of Intensive Cattle Development Project (ICDP) with the introduction of Frozen semen technology in the state. As per the National Breeding policy, this project introduced Jersey semen but the level of exotic inheritance was not defined. By the end of 1985-86, the department had been able to establish 11 (eleven) ICDP and related infrastructural net - work in rural areas with a potential coverage of 1.1 million breedable cattle in Assam. It covers 11 nos. ICDP, 26 nos. Regional Artificial Insemination centre (RAIC) and 547 nos. of stockman centre.Reviewing the result of the cross breeding programme under ICDP the earlier policy was modified in 1980 which proposed to produce crossbred by utilizing inheritance from three different breeds. Crossing among Jersey (J), Red Sindhi (RS) and Local (L) to generate a population of cattle of 50% J, 25% RS & 25% L inheritance to incorporate high yield of Jersey and draft ability of RS & L.

After review of the 1980 policy with three breeds, a revised Breeding Policy was established in the year 1998 with the cross breeding of Exotic jersey of high genetic merit with non-descript cattle of Assam to produce cross bred cattle with level of exotic inheritance (J) at 50% in major areas and 62.5% in some selected areas. The second & revised breeding policy was notified in 30th December, 2002 vide Govt. notification No. VFV. 255/2002/pt/23 Dtd. Dispur, the 30th Dec/2002. This policy is relatively simple than the previous one as only two pure breed line is to be maintained and will be continued for 20 years.

Policy for draft ability :There are three policy options for improvement of draft power in the state

The buffalo population of the state is primarily of swamp type distinctly different from the riverine breeds not only in behaviour but also in respect of chromosome numbers. . Though, in regard to milk yield, these buffaloes are not at par with those of improved riverine breeds, the milk of the swamp buffaloes is very rich in fat and protein content.

Murrah and Surti were found to have performed satisfactorily under organized farm environment in the agro-climatic conditions of Assam. Educated entrepreneurs and well to do farmers may be encouraged to rear these two riverine breeds in scientific manner under intensive system of management. The sate Govt. will maintain at least one elite herd of each of Murrah and Surti as a source of germplasm.

The possibility of crossing Murrah bulls with swamp female to enhance milk production is kept open due to its chromosomal differences. In absence of sufficient data on the performance and fertility status of swamp x riverine crossbreds, the approach of such a crossbreeding programme has to be cautious. Therefore, initially such a crossbreeding programme will be taken up experimentally in limited scale using the bulls of organized elite herds of Murrah and crossing them to swamp females. 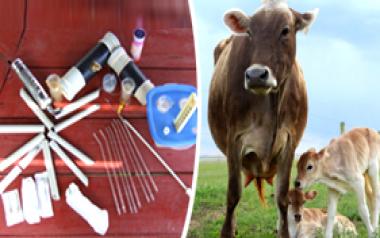